We have lost another of the 20%

Looking back, it is ironic that Jim wrote the following about Brett Garrett VE7GM when Brett passed away in August 2018

"They often say that 20% of a given membership do 80% of the work... Brett was one of the 20%, no, more like 5%. An active member of both the Surrey Amateur Radio Club (SARC) and Surrey Emergency Program Amateur Radio (SEPAR), Brett freely shared his knowledge and led Surrey Amateurs to two very successful Field Days."

I can attest to the same about Jim Smith VE7FO and his involvement with VECTOR and SARC. 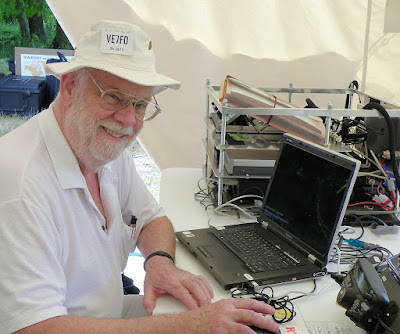 I first became aware of Jim when I laid the groundwork for the Vancouver Emergency Community Telecommunications ORganization (VECTOR) around 1999. Jim lived in the Dunbar area of Vancouver, and I became aware of his involvement with the Point Grey club, and that he was very knowledgeable about HF.

Jim was an avid contester who enjoyed working all modes -- especially CW and RTTY. A true mentor at heart, he often hosted "newbies" at his Vancouver home to introduce them to contesting. Many a new contester was given real experience operating "in the fray" and encouraged to keep honing their skills.

That knowledge translated into a very successful series of first Field Days for VECTOR. Jim also took on the project of planning the HF tower and antennas at e-Comm, the regional 9-1-1 and dispatch centre. That facility also houses the Vancouver EOC and its Amateur Radio component. Jim was a terrific resource in suggesting what might and might not work for that location, and he got that tower completed and functional. It was also Jim who persuaded me to look at offering our own Basic Amateur Radio classes. Well... 22 years later we are still offering them with the same basic content that we worked on back then, except now they are provided by Surrey Amateur Radio Communications (SARC), on-line, with successful students across Canada and even graduates abroad. 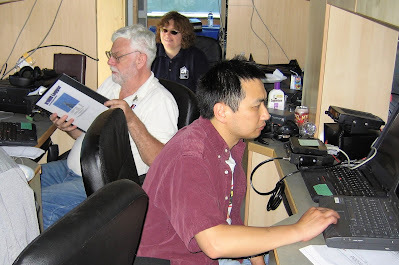 VECTOR Field Day (about 2003) Jim VE7FO as Station Manager in the new VECTOR bus.
Fred VE7CX in the foreground.

Around the time that I left VECTOR for the SARC group in 2004, Jim decided that he too would become a member of SARC. What followed was a mentorship program to introduce new members to contesting, one of Jim's passions. I spent many hours at his QTH working various contests under Jim's expert tutelage. 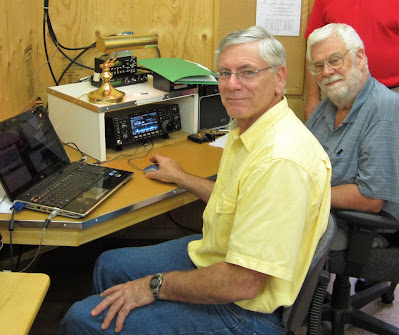 Myself (VE7TI) and Jim VE7FO. I'm being taught the fine points of contesting.

In one of many articles written for our SARC newsletter 'The Communicator', Jim wrote:

"My own involvement with SARC started when I was recruited by John VE7TI, as a Field Day operator. There are many enjoyable ways of conducting FD which range from everyone sitting around the BBQ, telling stories and making a few contacts to the hard-core contest style where everybody goes all out to WIN. I was told that it would be a hard core, win for Canada situation.  Being a hard-core contester myself I took the bait.

Well, it turned out that the operators, while enthusiastic, didn't have the HF contest experience necessary to achieve the goal.  Nonetheless, it was obvious that the potential was there so, once FD was over, I joined the Club and made a FD training proposal to the Exec with the goal of winning for Canada, which was accepted.

This training started in October and ran until next year's FD.  It consisted of many formal training sessions including classroom style and participation in the major contests, during which the ops received coaching on the operating techniques for maximizing the number of contacts per hour.

This would be a very significant investment of time for the trainees. This "Get Your Feet Wet" program to provide a low commitment introduction to contesting so that they could see whether or not they liked it."

Jim was instrumental as well in the team organizing what was probably SARC's best scoring Field Day ever. It was in 2015 and, encouraged by Jim, Brett and Stan VA7NF, the Field Day Committee decided that operating QRP might put us in a better scoring position than our usual high power entry.

It took quite a lot of persuasion, but in the end, it was indeed to be QRP. Jim's specialty was consulting propagation predictions and other data to see what we might be able to do with just 5W.  Hoo boy!!  With some adjustment to our antenna lineup, he suggested that we could do very well indeed.

Shattered the Canadian record for all categories.

Altogether a VERY significant achievement which any club would be proud of.

Wouldn't have happened without Jim (or Brett) 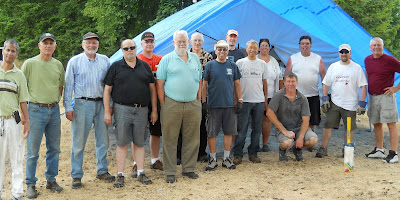 It may not be common knowledge that Jim was responsible for a lot of improvements to the premier Amateur Radio Contesting software N1MM+. As an expert contester Jim was able to make suggestions to the programmers that made the software the contesting leader it is today.

Jim always had a liking for analytics, and he took the lead in creating 'Station Manager' training. This role is as important to getting the maximum number of points in a contest as it would be in a real emergency, ensuring that critical traffic got through. The role includes selecting the most useful bands according to shifting propagation, switching antennas, and to assigning operators, so he was constantly monitoring rates, band conditions/solar conditions, greyline, run rates, etc. Everything was graphed and plotted.

We will miss you, Jim.

Thank you for all that you taught me and others.

We were very fortunate to have had you as a member.

We have lost another of the 20% Looking back, it is ironic that Jim wrote the following about Brett Garrett VE7GM when Brett passed away i...