If you're tired of climbing behind your station, and finding the right cable or outlet every time you want to use a piece of gear or an audio accessory connection, it may be time to find yourself a patchbay. A patchbay is a central audio connection area for all the gear in a station that allows any connection to or from equipment to be made in one location with a standardized cable and connector. Patchbays not only save time and headaches, they allow you to easily perform a number of mix tricks that would take serious head-scratching otherwise.

I like a clean station set-up without multiple speakers cluttering up my work area. All my gear is mounted in standard 19-inch rack on top of my desk (see https://ve7sar.blogspot.com/2019/08/bringing-order-to-chaos.html). I found a ProCo patchbay on eBay and I have used it at my home station for a number of years. My four transceivers are routed through them, as are my computers and, when I need it,  recording gear or the stereo output from my computer when I'm listening to some tunes. I even have my foot switch routed through my patch bay so that I can use it with any of my HF transceivers. You could also patch a CW key to multiple transceivers. Patchbay jacks are monoraul (mono), so you will have to pair jacks if your use is for stereo, but usually that is not a concern in Amateur Radio.

All of the audio outputs and mic inputs route through the back of the ProCo. From there I can select one or more speakers, headphones or a recording input by using a short patch cable with standard 1/4-inch jacks. I have several compatible mics that are also adapted for use through the patchbay, and that is generally as simple as using a 1/8 to 1/4-inch audio adapter or changing from an XLR to 1/4-inch adapter.


Patchbays are very simple, once you understand their purpose. They let you easily change the way your audio gear is connected, and to easily restore your standard operating setup just by removing all of the plugs from the front of the patchbay. This means that the patchbay must have some way of remembering what your standard operating methods are.

A standard patchbay is divided into a number of columns of pairs of jacks, each one containing one monaural patch point. Usually a patch point consists of an output from one device and an input to another device. How they are connected depends on how you normally use your station. With this in mind, there are four different ways patch points can be connected. Notice that the following diagrams show all combinations of jacks being inserted or removed from the front panel:

The open configuration never makes a connection from the top jacks to the bottom jacks. Notice how the two circuits are always kept separate.

This is useful for connecting a source that should not have more than one load, such as a dynamic mic. The mic comes into the back of the top jacks and the feed to the preamp is at the bottom. Inserting a plug in the top front jacks diverts the mic signal for use elsewhere, while preventing the mic from being loaded down. Inserting a plug into the bottom jack allows a different signal to feed the preamp.

By using both jacks, you can insert a mic-level effect between the mic and the preamp.
Examples: microphones, high impedance outputs


This is useful for connecting a normal signal flow from one piece of equipment to another, while allowing the connection to be tapped off of or replaced if needed. Inserting a plug in the top front jacks taps the signal for use elsewhere while letting the normal connection still pass signal. Inserting a plug into the bottom jack allows substituting a different signal while removing the normal signal flow.

By using both jacks, you can insert an audio stream into the signal path.

Examples: mixer to monitor amp, direct out to recorder in


The parallel configuration always makes a connection from the top jacks to the bottom jacks. Notice how the two circuits are kept together, and that both front panel jacks are outputs.

This is useful for connecting an output, which is normally connected to one input, to several different inputs at once. Both jacks can send the signal to places where it is needed.


Balanced patchbays have a second set of connections on each patch point for the Ring terminal, which are wired identically to the connections for the Tip terminal that are shown in the diagram. But before the TRS plug was developed, paired plugs were made with one handle, so they fit into two adjacent patch points for balanced signals. Some of these are still around.

My ProCo Patchbays has switches on each patch point, to select whether the patch point is Open, Normalled, Half-normalled, or Parallel. Some patchbays must be removed from the rack to change the switches. Other models require soldering to change each jack's configuration... Avoid those!

For most audio patching, two setups are used most often:

The first setup is the normal audio chain. For this setup, the output of each component in an audio chain is brought to the rear input of one patch point. The input of the next component in the chain is connected to that patch point's rear output. The patch point is set up as Half-normalled. The normal connection is maintained whenever plugs are not inserted into front jacks of the patch pair.

Inserting a plug in the upper front panel jack allows you to split the signal off in two directions.

Inserting plugs in both front jacks allows you to insert another component in the chain.

By inserting a cable in the front output jack of one patch point, and the front input jack of the next patch point downstream, you can remove a component from the audio chain. You can then connect cables to the remaining jacks of those patch points and use the removed component somewhere else (nifty use!).

Although it takes interconnection some planning at first, patchbays can make your station cleaner and your operating easier by keeping you from having to reach around behind gear to reconnect equipment frequently. They also make it super-easy to restore your most-often used configuration. All you do is pull all of the patchcords out of the front panel, and you are back to standard operation.

For more information on audio patching, there is a YouTube video at: https://youtu.be/L5LqR3Lqy5s?t=389 and for some ideas on RF patching see this great example: 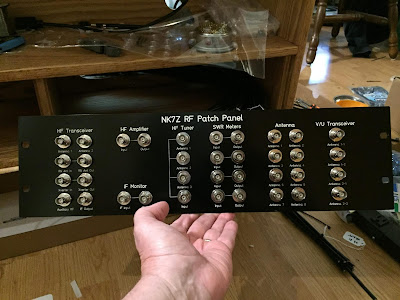 VA7NF Helps Explain What is Going On Here…  In the last post, I described my experience with modeling and construction of a quarter wave ... 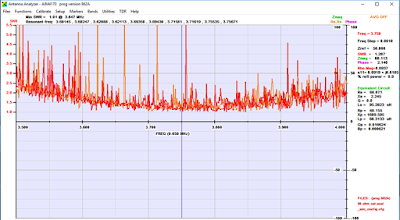