Chronology Of A Tower Installation - Part 1

The original plan was to document my experience with a planned tower installation at the new QTH, starting with first encounter at Surrey Municipal Hall, continuing with preparations on the ground, then concluding with the actual tower erection. This journey started 6 months ago shortly after I had moved into my new abode, when I made inquires about the procedure for erecting a tower and beam. My application for a building permit was refused by Surrey. Because of some legal sensitivities, I am going to defer my discussion of further developments with the municipality, and simply say that the installation is now going ahead – the bureaucratic hurdles to be reported at a later date.

Major physical problems to be resolved:
how to actually dig the hole since a machine cannot (legally) get access to the back yard;
where to dispose of the large volume of soil that will be removed;
how to get ready-mix concrete from the street into the hole, once completed, or alternatively should I make up my own concrete?

Last week I confirmed the location of the proposed tower and began digging the hole. Chief among my concerns was the need to have the tower sufficient offset from the property line so that the beam will not hang over my neighbour’s property. In addition, because my lot is heavily treed, I needed to spot it where branches will not interfere now or later.

Soils in this area of Surrey are comprised of dense glacial till, which typically contain a random mixture of clay, sand, stones and boulders. The good news is that such soils being stiff and difficult to erode, can often be excavated without slumping or over excavation, which means vertical walls on the excavation. The bad news is that they make for difficult digging… my situation exactly.

The US Tower design calls for an excavation 4.5 ft square, 6.5 ft deep, with a re-bar cage embedded in about 5 cu.yd of concrete. I elected to dig the hole by hand – I may come to regret this decision.

Here is my log of progress so far:
Day 1: marked out the location of the excavation, removed the sod and 6 inches of topsoil. Continued down another 6” for an overall depth of 12 in. Not bad for the first day.
Day 2: Encountering stones embedded in clay which could only be dislodged with a steel bar or mattock. Got down another 6”.
Day 3: The stones and clay are so difficult to penetrate that only slow progress with hand tools is possible. Removed another 6” with the greatest of difficulty. I am now down to 2 ft depth. Mercy!
Day 4: Encountered a small area of soft sand, which was easily removed. The remaining 2/3 of the hole bottom is covered with a hard layer that appears to be rock! Is this a buried boulder? I exposed this layer to allow deployment of more aggressive techniques.
Day 5: Rented a jackhammer and, to my great relief, found that the feared rock is actually cemented clay containing weathered rock which can be broken loose.  After half a day with the jackhammer and shovel, the hole is now 3 ft. deep. From here on it gets difficult to pitch the soil out of the hole into a wheelbarrow with a shovel, so I may have to use a bucket, rope and pulley. 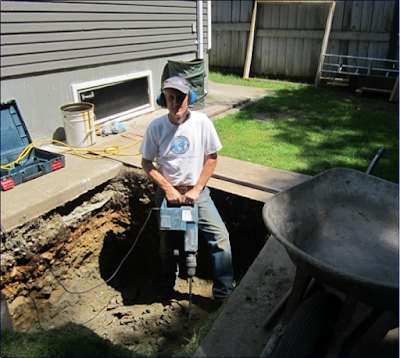 Back to Basics This 'Back to Basics' may be of particular interests to you off-roaders... The Canadian Basic Question Banks as...